For the second time in less than a month, California’s chief elections officer has refused to hand over data to President Trump’s voter fraud commission, arguing on Wednesday that the inquiry is still part of an “illegitimate” exercise.

“I still have the same concerns,” Secretary of State Alex Padilla said. “I can’t in good conscience risk the privacy of voters in California with this commission.”

The Presidential Advisory Commission on Election Integrity, which met for the first time last week, originally asked for the information from California and other states on June 29. A federal court refused last week to block the commission’s request, though as many as 21 states have insisted they won’t hand over details on voter names, addresses and political party affiliations.

The Presidential Advisory Commission on Election Integrity, which met for the first time last week, originally asked for the information from California and other states on June 29. A federal court refused last week to block the commission’s request, though as many as 21 states have insisted they won’t hand over details on voter names, addresses and political party affiliations.

TAR HEEL, N.C. — The Democratic chairman of the state elections board in North Carolina resigned Saturday, saying he did not want his partisan views to undermine a widening investigation into alleged election fraud in the 9th Congressional District race.

Andy Penry, chairman of the nine-member State Board of Elections and Ethics Enforcement, said in a statement to the board obtained by The Washington Post that he was stepping away to allow the investigation to continue “free of attempts at distraction and obstruction so that the truth can be revealed.”

Penry has fielded criticism from North Carolina Republican officials, who have pointed to his Twitter posts — which include a number of tweets highly critical of President Trump — as evidence that the board’s investigation is partisan and baseless.

“The investigation of criminal conduct and absentee voting fraud in the 2018 Republican primary and 2018 general election in congressional District 9 is a matter of vital importance to our democracy,” Penry wrote in the statement. “I will not allow myself to be used as an instrument of distraction in this investigation.”

Penry’s decision came after the nine-member elections board — which includes four Democrats, four Republicans and one unaffiliated voter — agreed unanimously Tuesday to delay certification of the results in the 9th District election amid allegations of an effort to fill in or discard the absentee ballots of Democratic voters.

Republican Mark Harris, who beat incumbent Rep. Robert Pittenger in the primary, leads Democrat Dan McCready in the race by only 905 votes, according to unofficial returns.

On Friday, the state board voted 7 to 2 to continue investigating the fraud allegations, leaving open the possibility that a new election could be called. The Associated Press announced it was revoking its projection that Harris won the seat in southeastern North Carolina.

In a statement Friday, Harris accused the election board of a lack of transparency and called for the results to be immediately certified.

“Make no mistake, I support any efforts to investigate allegations of irregularities and/or voter fraud, as long as it is fair and focuses on all political parties,” Harris said. “But to date, there is absolutely no public evidence that there are enough ballots in question to affect the outcome of this race. Accordingly, the Board should act immediately to certify the race while continuing to conduct their investigation. Anything else is a disservice to the people of the Ninth District.” 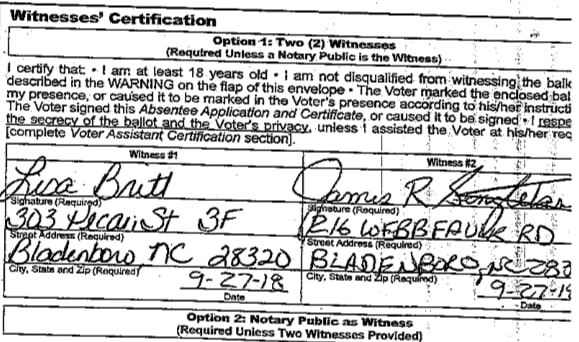