The Trump administration defeated environmentalist groups in federal court last week, convincing the 9th Circuit Court of Appeals to throw out a lawsuit and restraining order that had prevented construction of the $8-billion Keystone XL Pipeline from Canada to the United States.

A three-judge panel of the circuit court, consisting of Judges Edward Levy, Consuelo Callahan, and Carlos Bea, granted the dismissal motion made by the government and company TransCanada Corp. on June 6.

The job-creating project would add to the existing Keystone oil pipeline, finished in 2013, which runs from Alberta to Illinois, Texas, and Oklahoma. When completed, Keystone XL would move crude oil from Alberta to Montana, Oklahoma, and Texas, stretching

875 miles through Montana, South Dakota, Nebraska, and other parts of Canada.

As a candidate, Donald Trump campaigned against then-President Barack Obama’s nixing of the pipeline and took action to move the project forward, days after he was sworn in, promising it would create jobs, stimulate the economy, and reduce dependence on foreign oil.

The department was ordered to “take all actions necessary and appropriate to facilitate its expeditious review” and to “reach a final permitting determination … within 60 days of TransCanada’s submission of the permit application.”

“We are pleased with the ruling,” Matthew John, spokesman for TransCanada Corp., reportedly said. “We look forward to advancing the project.”

In its determination to move forward with pipeline construction, the Trump administration outmaneuvered pipeline opponents. During the course of the litigation, Trump revoked the 2017 permit allowing the building of the pipeline to move forward, thus depriving the courts of jurisdiction in the case.

The circuit court panel was left with no choice but to dismiss as moot the lawsuit and permanent restraining order against the project issued Nov. 8 last year by Judge Brian Morris of the U.S. District Court in Montana. Morris had ruled with environmentalists, finding that the Department of State disregarded evidence related to climate change needed to measure the potential environmental impact of the pipeline project and had violated the Administrative Procedure Act, which mandates that reasons be provided for certain government decisions.

After withdrawing the initial permit, the Trump administration issued a second permit for the pipeline this past March that environmentalist groups say they will fight

After her side lost in court last week, Jackie Prange, senior attorney with the Natural Resources Defense Council, said her left-wing group would fight on.

“The Keystone XL pipeline is a disaster waiting to happen and we will not stop fighting it, or President Trump’s extraordinary misuse of executive power to disregard the courts and environmental laws,” Prange said.

“This proposed project has been stalled for a decade because it would be all risk and no reward, and despite the Trump administration’s efforts, they cannot force this dirty tar sands pipeline on the American people.”

Donald Trump campaigned against then-President Barack Obama’s nixing of the pipeline and took action to move the project forward, days after he was sworn in.

END_OF_DOCUMENT_TOKEN_TO_BE_REPLACED 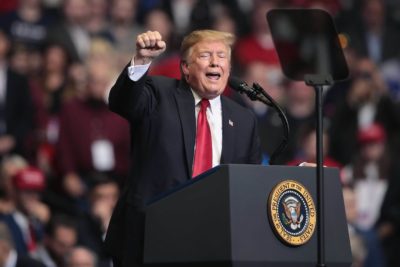 The drumbeat of defeats grew hard to ignore.

A federal judge struck down the Donald Trump administration’s plan to require some people to work for their Medicaid benefits. Another judge halted Trump’s plan to open Arctic waters to drilling. Yet another ordered an end to what critics said was the administration’s efforts to encourage an end run around the Affordable Care Act. All in the span of about a week.

I spent some time exploring whether I could create a more formal list only to discover that The Washington Post had basically done that.

Here’s how the article by Fred Barbash and Deanna Paul started:

Federal judges have ruled against the Trump administration at least 63 times over the past two years, an extraordinary record of legal defeat that has stymied large parts of the president’s agenda on the environment, immigration and other matters.

In case after case, judges have rebuked Trump officials for failing to follow the most basic rules of governance for shifting policy, including providing legitimate explanations supported by facts and, where required, public input.

Many of the cases are in early stages and subject to reversal. For example, the Supreme Court permitted a version of President Trump’s ban on travelers from certain predominantly Muslim nations to take effect after lower-court judges blocked the travel ban as discriminatory.

But regardless of whether the administration ultimately prevails, the rulings so far paint a remarkable portrait of a government rushing to implement far-reaching changes in policy without regard for long-standing rules against arbitrary and capricious behavior.

It only got more startling.

Two-thirds of the cases accuse the Trump administration of violating the Administrative Procedure Act (APA), a nearly 73-year-old law that forms the primary bulwark against arbitrary rule. The normal “win rate” for the government in such cases is about 70 percent, according to analysts and studies. But as of mid-January, a database maintained by the Institute for Policy Integrity at the New York University School of Law shows Trump’s win rate at about 6 percent.

I decided to reach out to the reporters and hear how their project came together and what they made of it. It seemed all the more timely in that the Trump administration is likely looking at a challenging legal road as it seeks to enforce the president’s declaration of a national emergency at the southern border.

Barbash agreed to a modest Q&A:

What prompted you to undertake the review?

I watch the federal courts closely and became aware over time that the administration was being challenged in court on almost every important policy and deregulatory decision and that U.S. district court judges, who ordinarily defer to the government in most of these challenges, were no longer doing so. Deanna Paul and I began keeping track of the adverse rulings. I’ve been watching regulation and courts for a very long time, and the numbers of defeats were well beyond anything I had seen.

Was it hard to capture all the possible cases?

I’m not sure we did capture all the possible cases. The highly publicized cases, like DACA and the travel ban, are obvious. Nobody seems to keep some sort of master list of everything else. So Deanna and I began to track them down using a variety of sources. We wound up with the number 63, which even since we wrote the piece has increased to about 68.

What finding surprised you most?

Were you able to say the losses in nature or volume were different than prior administrations?

It would have taken six or seven months to get exact numbers. But every expert we talked to agreed that the volume was much higher for the Trump administration. The question then became why. As I wrote in an earlier story, when the losing streak started, it’s kind of like relationships. When one or two don’t work out, you can plausibly blame the other people. When the numbers mount, you have to think, maybe the problem is me, that is, maybe I’m doing something wrong.

Some experts you cited said the government had failed to do basic legal homework. You think that was really true? Seems kind of crazy.

It does seem crazy, but when you read the cases and the opinions of the judges, including Republican judges, that’s what they found in so many instances. It’s hard to tell whether the agencies knew that they were out on a limb with so many of these decisions and went ahead anyway, or didn’t have competent legal advice. Some experts, as the article said, thought that the failure of some agencies to “do their homework” as they suspended or delayed regulations, for example, showed that they were more interested in making announcements of deregulatory change than in the change itself, so the risk of a judge blocking their actions didn’t concern them all that much. Of course, the agency spokespeople deny that. But lawyers know, for example, that the law sometimes requires public notice and comment when making regulatory change. It’s not hard. It just slows things down. But if they fail to do it, it’s almost a certainty that a judge will object. These are not close calls. Now some of the cases, like the census case (the Commerce Department’s decision to add a citizenship question to the census), are much more complex than what I’m describing and raise deeper issues, which we continue to pursue.