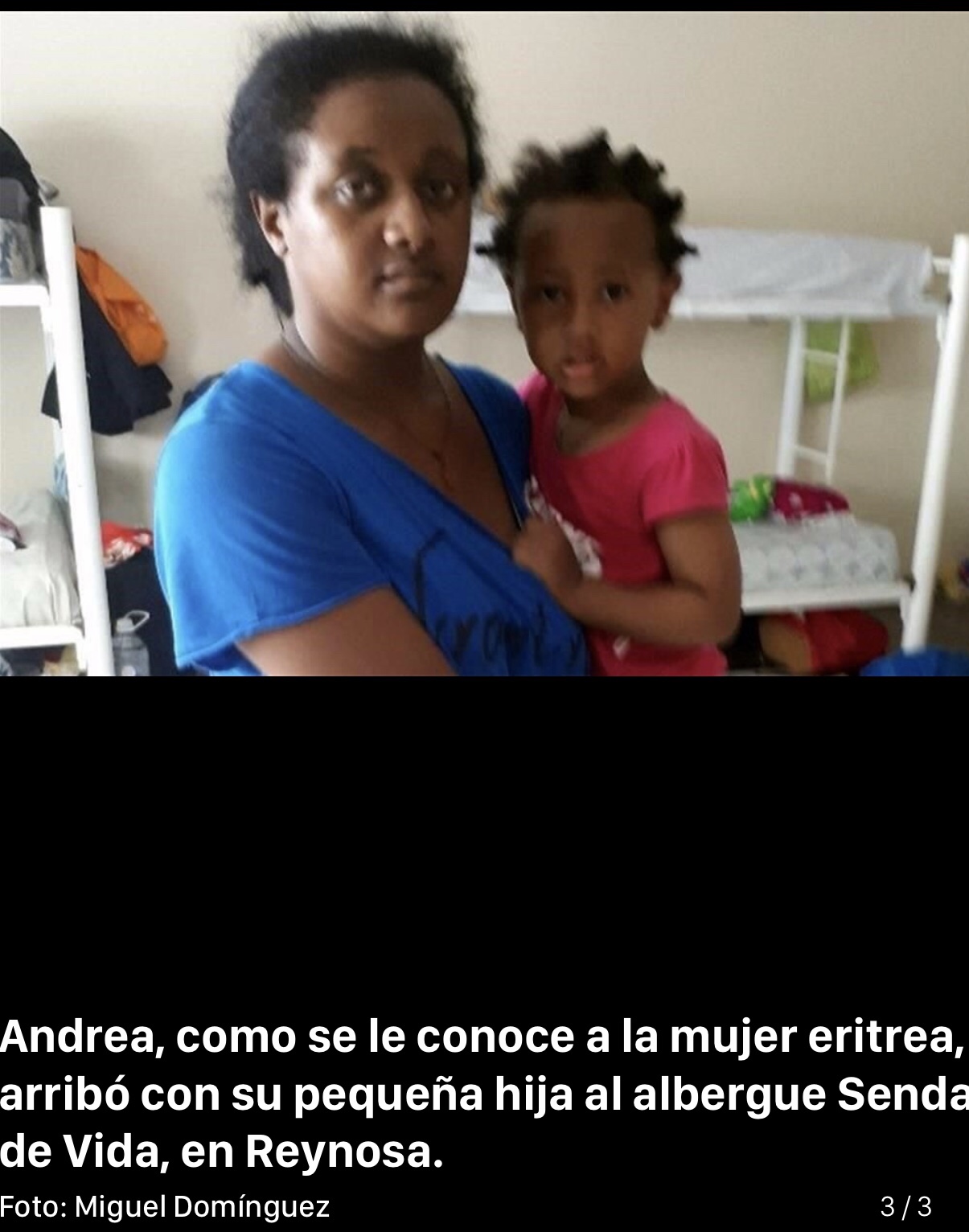 The Obama administration failed to protect thousands of Central American children who have flooded across the U.S. border since 2011, leaving them vulnerable to traffickers and to abuses at the hands of government-approved caretakers, a Senate investigation has found.

The Office of Refugee Resettlement, an agency of the Department of Health and Human Services, failed to do proper background checks of adults who claimed the children, allowed sponsors to take custody of multiple unrelated children, and regularly placed children in homes without visiting the locations, according to a 56-page investigative report released Thursday.

And once the children left federally funded shelters, the report said, the agency permitted their adult sponsors to prevent caseworkers from providing them post-release services.

Sen. Rob Portman (R-Ohio) initiated the six-month investigation after several Guatemalan teens were found in a dilapidated trailer park near Marion, Ohio, where they were being held captive by traffickers and forced to work at a local egg farm. The boys were among more than 125,000 unaccompanied minors who have surged into the United States since 2011, fleeing violence and unrest in Guatemala, Honduras and El Salvador. 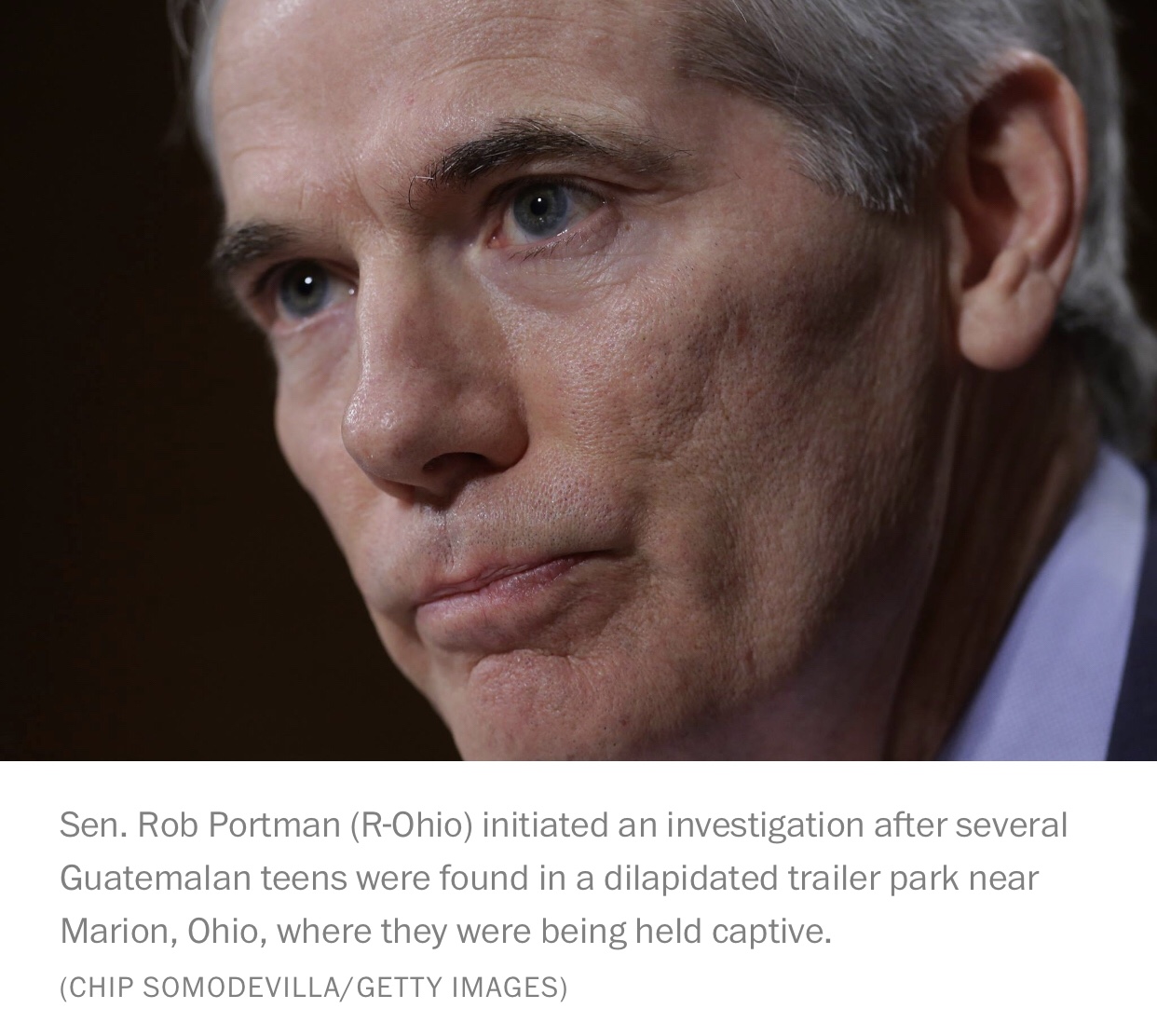 “It is intolerable that human trafficking — modern-day slavery — could occur in our own backyard,” Portman said in a written statement. “What makes the Marion cases even more alarming is that a U.S. government agency was responsible for delivering some of the victims into the hands of their abusers.”

The report concluded that administration “policies and procedures were inadequate to protect the children in the agency’s care.”

HHS spokesman Mark Weber said in a statement that the agency would “review the committee’s findings carefully and continue to work to ensure the best care for the children we serve.”

The report was released ahead of a hearing Thursday before the Senate Permanent Subcommittee on Investigations, which Portman co-chairs with Sen. Claire McCaskill (D-Mo.). It detailed nearly 30 cases where unaccompanied children had been trafficked after federal officials released them to sponsors or where there were “serious trafficking indicators.”

For example, one Guatemalan boy planned to live with his uncle in Virginia. But when the uncle refused to take the boy, he ended up with another sponsor, who forced him to work nearly 12 hours a day to repay a $6,500 smuggling debt, which the sponsor later increased to $10,900, the report said.

A boy from El Salvador was released to his father even though he told a caseworker that his father had a history of beating him, including hitting him with an electrical cord. In September, the boy alerted authorities that his father was forcing him to work for little or no pay, the report said; a post-release service worker later found the boy was being kept in a basement and given little food.

The Senate investigation began in July after federal prosecutors indicted six people in connection with the Marion labor-trafficking scheme, which involved at least eight minors and two adults from the Huehuetenango region of Guatemala.

One defendant, Aroldo Castillo-Serrano, 33, used associates to file false applications with the government agency tasked with caring for the children, and bring them to Ohio, where he kept them in squalid conditions in a trailer park and forced them to work 12-hour days, at least six days a week, for little pay. Castillo-Serrano has pleaded guilty to labor-trafficking charges and awaits sentencing in the Northern District of Ohio in Toledo.

The FBI raided the trailer park in December 2014, rescuing the boys, but the Senate investigation says federal officials could have discovered the scheme far sooner.

In August 2014, a child-welfare caseworker attempted to visit one of the children, who had been approved for post-release services because of reported mental-health problems, according to the report.

Instead of investigating further, the caseworker closed the child’s case file, the report said, citing “ORR policy which states that the Post Release Services are voluntary and sponsor refused services.”

That child was found months later, living 50 miles away from the sponsor’s home and working at the egg farm, according to the report. The child’s sponsor was later indicted.

VanSickle is a reporter for the Investigative Reporting Program, a nonprofit news organization at the University of California at Berkeley.

Federal immigration authorities say they have arrested more students enrolled at a sham Detroit-area university created by the Department of Homeland Security.

“Several have since been removed and others are currently in various stages of the removal process,” Walls said.

Authorities announced Jan. 30 that 130 students enrolled at the university had been arrested. The sting set up by DHS involved making the bogus school appear to be a real institution, including accreditation. Many of the students were enrolled in master’s degree programs for engineering and computer-related fields and arrived in the U.S. through student visas, immigration attorneys said.

The detained students – mostly from India – were being housed in 34 lockups across the county, according to the American Telugu Association.

Many hail from the Telugu-speaking areas of India, the association told the paper. Some come from poor areas and took out substantial loans “to study here to study and pursue the American dream,” association president Parmesh Bheemreddy told the paper.

“Now, it will be difficult to pay off their debts after they’re sent back to India,” he said.

The immigration violations of which they are accused happened only because they were enrolled in the fake university, something they didn’t know at the time, immigration attorneys said. Some of the remaining 440 students who haven’t been arrested have opted to leave the U.S.

Mexicans, now saddled with hosting around 3,000 migrants waiting to declare asylum at an official United States border crossing between Tijuana and San Diego, California, are losing patience with the “workers” and deporting those that make trouble back to their home countries.

The Associated Press reports that Tijuana officials have “arrested 34 caravan members for drug possession, public intoxication, disturbing the peace and resisting police, and they would be deported to their home countries,” for failing to follow Mexico’s laws.

Hundreds of Tijuana residents have also staged protests against the migrants, who have taken over a local soccer stadium to use as a temporary shelter.

The leading migrant caravan trying to make its way to the United States border is admitting defeat after asking the Mexican government to provide dozens of buses to speed up the group’s journey northward.

The setback comes days after caravan leaders asked for “safe and dignified” transport to Mexico City, a checkpoint along the way for a group that has been dwindling in size as members either apply for protected status in Mexico or drop out over fatigue exacerbated by the sweltering weather conditions they have been facing.

It has been a tumultuous journey so far for the leading caravan, which is now estimated to contain around 4,000 people – down from a peak of more than 7,000. 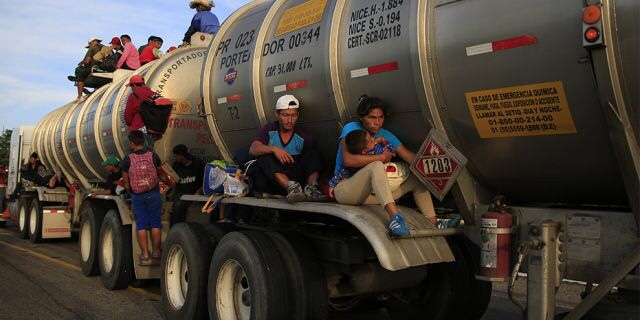 A woman holding her baby hitches a ride on the fender of a tanker in Niltepec, Mexico, on Tuesday. (AP)

The caravan crossed into Mexico from Guatemala around Oct. 19 and, at the start of this week, appeared to be pushing northward at a faster pacewith the help of free rides being offered to them in trucks and other vehicles.

But the arduous nature of the trek – walking day by day to new towns and cities and sleeping on the streets – has been eating away at the migrants’ morale from the outset. The request for bus travel for all also indicates an increased sense of urgency amongst the caravan’s members to make it to the U.S. border – despite thousands of American troops awaiting them there and a steady drumbeat of warnings from President Trump and U.S. officials to turn around.

“Of the friends that I have been with, all want to go back,” Hasiel Isamar Hernandez, a 28-year-old mother of three from Honduras, told the Associated Press days ago. The caravan originated in that country as many are trying to flee its pervasive poverty and violence. 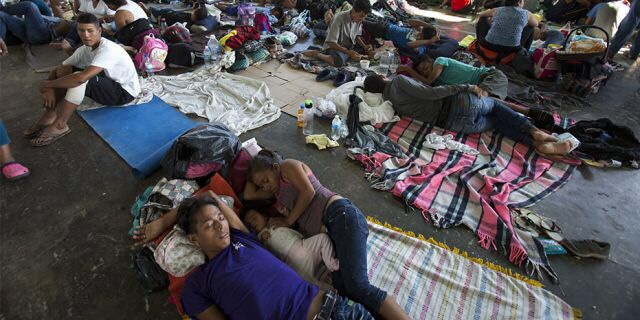 People rest on the ground in a municipal lot serving as a makeshift campground, as a caravan of Central Americans hoping to reach the U.S. border takes a rest day in Juchitan, Mexico, on Wednesday. (AP)

Not all of the migrants that have abandoned the journey though are going back to Honduras. Mexican Interior Secretary Alfonso Navarrete Prida said about 2,300 of them so far have applied to stay in Mexico under a government plan, and hundreds more have accepted assisted repatriation.

Around 3 a.m. Thursday morning, the lead caravan, according to the Associated Press, hit the road from Juchitan in southern Mexico for a trek to Santa Maria Jalapa del Marques, about 35 miles to the west.

The group is moving early because temperatures at their destination are forecast to peak at 93 degrees today.

The leading caravan is still about 900 miles from the closest entry point into the U.S. – but their intended route remains a mystery. However, choosing Jalapa del Marques as the next stop appeared to indicate they are opting to travel via Oaxaca state’s eponymous capital instead of turning north toward the Gulf coast state of Veracruz, which is a common transit route toward McAllen, Texas.

Three more caravans are now behind them.

A second, smaller group of 1,000 or so migrants is more than 200 miles back. A third band of about 500 from El Salvador has made it to Guatemala, and a fourth group of about 700 set out from the Salvadoran capital Wednesday.

A man filling a water tank on a truck pauses to spray migrants with water to help them shower in Juchitan. ()

Mexico’s government so far has flip-flopped on how they plan to deal with the caravans.

The first two caravans were confronted by Mexican federal police at a bridge crossing along its border with Guatemala. The officers stopped them from walking en masse over the bridge – but didn’t prevent them from entering their country entirely. The migrants simply waded across the Suchiate River to get past the police, sometimes in their line of sight.

Stunning images have emerged this week capturing the second caravan moving across the river.

Three more caravans are now behind them.

In the first week after the leading caravan got into Mexico, federal police sometimes enforced obscure safety rules, forcing them off paid mini-buses, citing insurance regulations, added the Associated Press. They also stopped some overloaded pickup trucks carrying migrants and forced them to get off.

But in recent days, officials from Mexico’s immigrant protection agency have organized rides for straggling women and children as a humanitarian effort. And police have routinely stood by as migrants piled aboard freight trucks.

Also Wednesday, a Guatemalan woman gave birth to the first known caravan baby at a hospital in Juchitan. Mexico’s governmental National Human Rights Commission said it had arranged for medical attention for the woman.

The Associated Press contributed to this report.

Top Republicans are pointing to an impassioned 1993 speech by then-Sen. Harry Reid, D-Nev., in which the future Senate Majority Leader argued that “no sane country” would award citizenship to the children of illegal immigrants born on their soil, and promoted his own legislation to end the practice in the United States.
— Read on www.foxnews.com/politics/harry-reids-1993-claim-no-sane-country-would-provide-birthright-citizenship-fuels-gop-immigration-push

One migrant caravan member admits he’s been deported and convicted of attempted murder in the U.S. – he’s planning to reenter and request a pardon for his felony | @GriffJenkins