It felt like hours, but was only a mere 45 seconds.

In perhaps the most moving moment of this weeks United Nations General Assembly (UNGA) meeting, Israeli Prime Minister Benjamin Netanyahu stared down the audience in a moment of silence that made all those there – and the rest of us watching on television – feel the weight of his message: The Iran deal makes war more likely.

Netanyahu continued, “I refuse to be silent. The days when the Jewish people remain passive in the face of genocidal enemies, those days are over.”

Israel has always reserved the right to defend itself against its enemies, a point Netanyahu hammered home this week.

Indeed, the nuclear agreement with Iran has been a hot topic in US politics, featuring prominently in the presidential campaign and across Congress. We now know that despite the fact that only 21% of Americans approve of the deal, the White House and Democrats have a bulletproof plan securing its passage.

But it appears that we don’t know the whole story.

There was a speech at the UNGA that directly relates to the deal and our methods of negotiation with Iran that was overlooked for reasons that escape me. 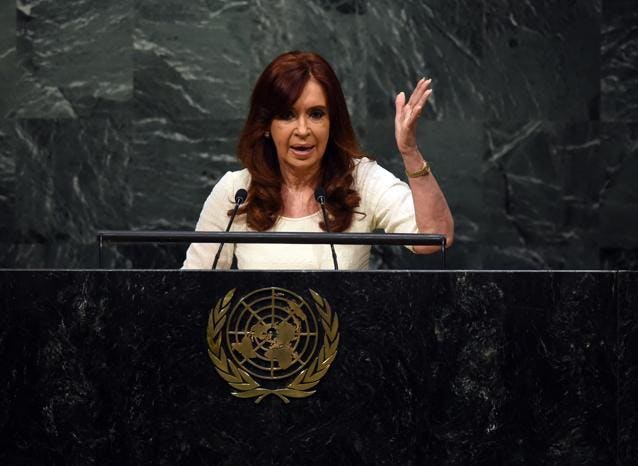 During a 45-minute speech, Argentine President Cristina Fernandez de Kirchner claimed that in 2010 a former Obama administration official asked Argentina to “provide the Islamic Republic of Iran with nuclear fuel” under the control of the International Atomic Energy Agency.

According to Kirchner, Gary Samone, who was the White House Coordinator for Arms Control and Weapons of Mass Destruction at the time, visited Argentina in the hopes of convincing them to provide reactor fuel. When the Argentine Minister of Foreign Affairs asked for the request in writing, they never heard from Samone again.

There is a backstory to this, as Kirchner explained. In 1987, Argentina supplied Iran with nuclear fuel for their “Teheran” reactor. Samone told Hector Timmerman, the Argentine Foreign Minister, that negotiations with Iran to end or limit its nuclear enrichment program  had begun and that the “Teheran” reactor was a sticking point. Iranian negotiators wouldn’t go forward without the fuel. And Argentina was the United States’ answer.

Another key juncture in this triangle between Iran, Argentina, and the United States is the story of Argentinian Special Prosecutor Alberto Nisman, his investigation of the 1994 bombing of a Jewish community center in Buenos Aries, and his mysterious death in early 2015. Just hours before Nisman was set to present evidence implicating President Kirchner in a conspiracy to cover up Iran’s role in the 1994 bombing, the prosecutor was found dead. Kirchner and her associates insist Nisman’s death was a suicide, but officials have indicated that Nisman was actually assassinated in his apartment execution-style.

Adding to the mystery, investigators also found that someone logged onto Nisman’s computer in the hours after his murder but before his mother discovered his body the following morning.

This narrative is, of course, puzzling and worrisome on a number of levels.

The mystery surrounding Nisman’s investigation and murder seem to indicate more tangible connections between Tehran and Buenos Aries than President Kirchner would like to admit. Additionally, the implied conspiracy allows us to draw revealing conclusions on more dilemmas associated with Argentina’s involvement with Iran’s nuclear ambitions and the United States’ potentially tacit approval.

Throughout the arduous Iranian negotiations, the American public has heard nothing of the backdoor deal between Iran and Argentina bartered by the United States. In 2010 there was no public talk of Iranian nuclear negotiations in US media. This makes it all the more troubling that American negotiators and President Obama involved a secondary, non-nuclear power from a continent that has long sought to keep itself free of nuclear weapons or controversy.

Additionally, this potential bilateral deal between Argentina and Iran occurred during Mahmoud Ahmadinejad’s presidency in Iran, well before current President Hassan Rouhani came to power. During this time, the Iranian leadership showed unbridled aggression towards the US and Israel. In terms of existential threats, the rhetoric put forward by the Iranian government then was far worse than that which we observe now.

Samone’s seemingly rogue dealings and, more generally, the Obama administration’s 2011 entrance into negotiations were not well known until a recent report from the Middle East Media Research Institute (MEMRI).

According to Ayatollah Ali Khameni, Iran’s Supreme Leader, Obama first reached out in 2011 through the Oman’s leader Sultan Qaboos. The Iranian interpretation of Obama’s proposal is as follows: The Americans “want to solve the nuclear issue and lift sanctions within six months, while recognizing Iran as a nuclear power.”

What’s more, according to the MEMRI report, John Kerry was already involved as an Obama ally, even with Hillary Clinton still in office as Secretary of State. Then-Senator Kerry apparently sent a letter to the Iranian regime “stating that America recognizes Iran’s rights regarding the enrichment cycle.”

The MEMRI report outlines how Iranian officials have revealed that the Obama administration initiated secret negotiations well before the American public heard anything about it. These 2011 talks put the United States directly across the table from Iranian hardliners led by Ahmadinejad. These men were by no means the more reasonable pragmatists in President Rouhani’s cabinet, especially Foreign Minister Mohammed Zarif and his colleagues, who the Obama administration have lauded for their receptiveness to Western negotiators.

The American public had every right to know Obama’s intentions in Iran in order to make an educated voting decision in 2012 and, further, to more completely understand the deal we have today.

This is not to condemn the President for taking leadership on a critical issue, but Obama’s ambitions clearly put the United States at a tremendous strategic risk on a significant issue requiring years of transparency and consistency in American leadership,. If Obama would have subsequently been unable to continue negotiations as an outgoing president, American diplomacy would have been severely weakened.

This lack of transparency is not only disturbing, but may very well threaten the integrity of our latest deal with Iran. For the sake of American leadership, the safety of our Israeli allies ,and regional stability, I surely hope our next presidential administration provides the public with more information that can help us to understand the circumstances of our nuclear agreements and major foreign policy decisions generally.

I’m a longtime political strategist, Fox News contributor and author of several books, including the recently published Putin on the March. Follow me on Twitter @DouglasESchoen.